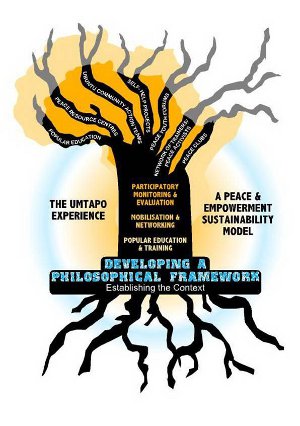 Umtapo is engaged in the struggle for peace and justice.  It was established in 1986 in response to the rise of internecine violence within the black community and the resultant division and intolerance. As a consequence, Umtapo engaged in youth and womenâ€™s leadership training programmes, literacy and popular education, and information dissemination through publications and public fora for critical discourse.  As director Deena Soliar says, â€˜The idea was always; people must take control over their own lives. â€œ Since then, it has been a founding member of numerous organisations and networks, such as AALAE and CIVICUS. For 15 years Umtapo has published a quarterly newsletter, Peace Africa, a networking and discussion resource.

Umtapoâ€™s slogan is â€˜Free the mind, free the land.â€™  Its main purpose is critical awareness raising: helping people to â€˜read the worldâ€™ as Paulo Freire put it. Conscientisation should lead to action, and Umtapo works with a variety of constituencies and processes in order to mobilise for change-action. Umtapoâ€™s vision is a society that will be characterised by political, social and economic justice and values that are consistent with the spirit of Ubuntu. Its mission is to empower and enable people, particularly youth and women, through popular education and participatory development, to take control of their own lives.

Mainly youth, through schools programmes and awareness-raising workshops; but also members of the public through a range of seminars, workshops courses and text-based materials.

Previously, Umtapo focused on Literacy Training Courses for facilitators and trainers; Gender and Development Courses for activists, academics, and government personnel; Community Development and Self-Reliance Courses for youth workers; and a variety of smaller training workshops in project management, HIV and Aids, Ubuntu, and gender-based violence. More recently, there is a specific focus on peace, human rights and anti-racism.

All Umtapo trainings are based on the principles of popular education within the framework of the Paulo Freirean philosophy.  The material conditions of  everyday lives of people from the basis for education work, and Umtapo has clearly articulated principles of anti-racism, anti-sexism and self-reliance.

Mobilisation for action is a crucial component of the work and Umtapo is engaged in establishing a variety of forums through which messages of peace and anti-racism are sustained:

* At primary schools, Umtapo has established Childrenâ€™s Peace and Empowerment Forums (CPEFs) with the specific aim

*At secondary school level,  Umtapo has facilitated the establishment of Peace Clubs.

* Public seminars for concerned citizens and other civil society groups

Networking is an important component of Umtapoâ€™s work, at local, national and international levels. Umtapo has participated in various continental and global initiatives such as the African Association for Literacy and Adult Education, the International Council for Adult Education, CIVICUS, the Hague Appeal for Peace, and the International Peace Bureau. Umtapo has also built a range of partnerships with other organisations and institutions, particularly in the area of peace / peace-building and social activism.

Umtapo is firmly rooted in and committed to a Freirean approach to popular education.