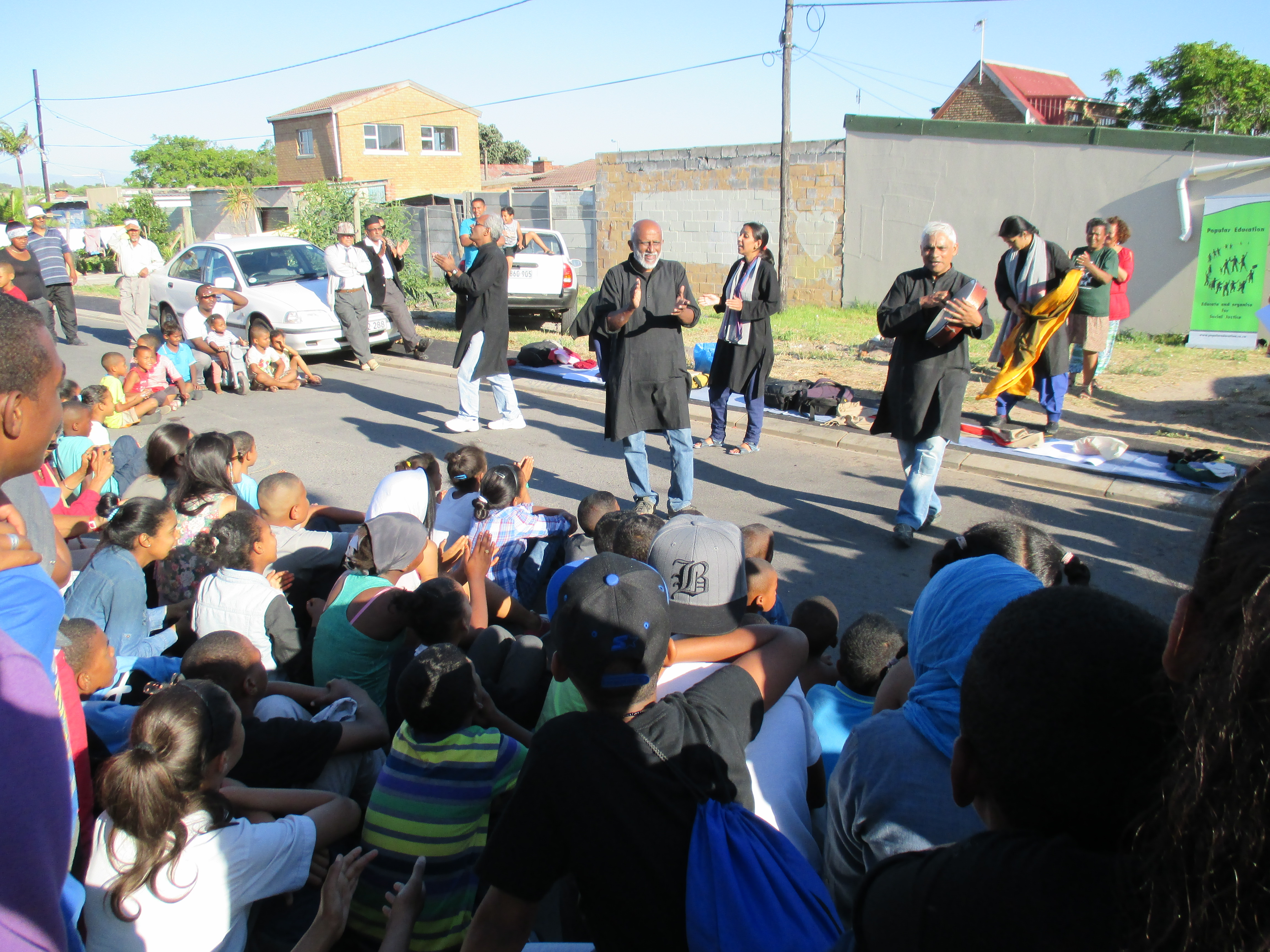 One of the proposed aims of the â€˜Traditions of Popular Educationâ€™ research is to advocate for popular education:  expose people to what it feels like to participate, and stimulate them to think and act on their insights.  We believe that popular education is much more than a methodology or set of tools â€“ it is, grounded in ordinary peopleâ€™s everyday experiences and struggles and strongly underpinned by values of equality and justice and hopes for a radically different future.

On 27 October, six members of the Indian street theatre company Jana Natya Manch  (Janam) arrived in Cape Town for a two-week tour. They had a busy schedule of performances and workshops, and they gave all their energy to what became memorable occasions for all who participated.

Each performance was contextualised as a popular education event: after brief introductions to the group and the role of street theatre in popular education, Janam performed one of two plays: â€˜Enough is enoughâ€™, about workers who are abused and exploited by ruthless capitalists. The play ends with a call for workers (and unemployed) to organize. â€˜The faces of violenceâ€™ is a play that shows the many ways in which women are turned into commodities and slaves and abused emotionally, mentally, physically and sexually. The play calls on all to bring an end to patriarchy. After each performance, the audiences split into small discussion groups, and, facilitated by a member of the popular education team, had intense dialogues about the similarities between India and South Africa, the causes of violence and abuse, and possible responses. The discussions themselves became important moments of vibrant interaction, as one participant from Athlone described: â€œStatice Heights is not a very close community â€“ so I was surprised to see them all talk to each other.â€  This could become the beginning of further productive engagements!

To begin with, Janam tested the waters of a S.A. audience made up predominantly of adult and community education students from various organisations in / around Cape Town at UCT. After a lecture and discussion outlining their background, rationales for their work and ways of working, they performed both plays. The ensuing discussion raised questions about the use of humour in serious matters such as abuse. It also raised the issue of language and communication as performances were predominantly in Hindi â€“ and audiences used their imagination to interpret what they saw and create the links to their everyday situations.

Before presenting  the 11th annual Julius Nyerere â€˜lectureâ€™ hosted by the UWC, on 30 October in the historical â€˜Senate Chambersâ€™, Janam contributed to a colloquium on â€˜traditions of popular educationâ€™. A time-line of over a century of popular education in South Africa was followed by a conceptual analysis of present and past popular education practices that demonstrate the ever shifting emphases in multiple praxisâ€™ of popular education. The â€˜Chambersâ€™ were decked out with large reproductions of historical posters from popular education past and present, and washing lines that displayed many of the T-Shirts produced over the years as communication and mobilising tools. The Nyerere lecture, attended by some 150 people, was in the form of a performance of â€˜Enough is Enoughâ€™. Members of the audience commented how the theatre managed to bring familiar issues close to home, especially in the context of the Marikana massacre, and how emotional engagement with some of the shocking images can help to raise the anger that is necessary to want to effect social change.

In the ensuing 10 days Janam were hosted by various community groups under the banner of the Popular Education Programme supported by other NGOs and community-based organisations. For many members of the audiences in Vrygrond, Delft, Athlone, the City, Bredasdorp and Kleinmond this was their first ever exposure to theatre in the streets. One woman from Delft said:  â€œWhen I went home and thought about it, they showed us what happens in their place and that they can stand up for women: â€˜enough is enoughâ€™! We can also stand up! We can do it in our place now.â€  At the end, some children responded to the performance by doing their own short play and one woman commented that the audience had wanted children in the group because they also get abused: â€œThatâ€™s why the children did their play, from their context.â€  They valued the experience highly:  â€œIf the childrenâ€™s response was the only one it was a success! It showed they could relate what they saw to their context. The organizing group must now think how to take this forward: how do you further engage he community around the topic!â€

In Athlone community members had blocked off a number of streets and cleared the sidewalk to create a performance space. People coming home from work in the late afternoon stopped to see what was going on and joined the hundreds of young and old and children assembled. In the best tradition of street theatre, the show became part of everyday life â€“ as one person remarked, â€œthese are the things that happen every day in our community. I could see the responses to the rape scene on the faces of the audienceâ€, â€œThey recognized what they saw and were shockedâ€ said another, â€œThe tradition side of the message was important to me: itâ€™s important for the partner (men / husbands) to see that!â€. The organisers of the event used the moment to address all the community members who had gathered and tell them about the new law: that if you harbour gang members and drug lords you can loose your house!

Popular theatre and education were closely linked to action in the community when it became clear how they can be used to conscientise and mobilise people towards common purpose and strategic planning.

Janam also ran a very inspiring theatre workshop for mainly young people many of whom are aspirant dancers and actors, at the Childrenâ€™s Resource Centre. It left all those who participated with a good sense of the power of theatre â€“ especially if it goes to where people are, rather than waiting for people to go to a distance venue. And for popular education, a performance based on and illustrating a common problem is the best possible â€˜codeâ€™ and starting point for analysis â€“ towards producing understanding and deeper insights of how we are all connected in our attempts to forge a better future for all.  Theatre is a powerful tool for creating images and visioning alternatives and in this way, inspiring hope!

In the words of one message of appreciation: â€œI do not think that as a group we could have words worth to express our appreciation for Janam. You can tell the group that they made a mark in the hearts of all the participants.â€

* For more photo's check out the galleries: