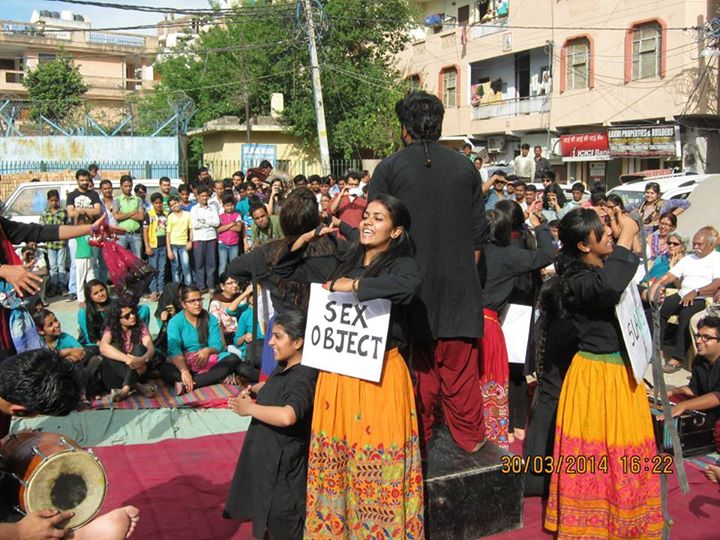 Jana Natya Manch is a radical street theatre group in India. Founded in 1973 has done thousands of performances of its street plays and full staged plays. It has worked in over 140 towns, cities and villages of India.

In January 2014, we conducted an interview with Sudu (Sudhanva Deshpande, Janam actor, director and writer) and Mala (Moloyashree Hashmi, actress and leading organiser) as part of the â€˜traditions of popular educationâ€™ research. Here, we present an edited extract. Street theatre is one form of popular education and we have a lot to learn from people wiho have that much experience as Sudu and Mala!

The full interview will soon be available as a podcast, on this site.

If you want to learn more about this group please go to their Facebook page https://www.facebook.com/jananatyamanch where you will find links to pictures, movies etc

Please describe what you do!

Sudu: We donâ€™t really think of our work in terms of projects because we donâ€™t work on a funding model at all; thereâ€™s no grants that we apply for, thereâ€™s no funding, etcetera. So therefore we donâ€™t need to think in terms of: okay, now we have done this project, now we need to move onto the next project for which we need to get funds â€“ thatâ€™s not how our mindset works. We work in terms of plays and a play will remain alive as long as it needs to remain alive, for as long as itâ€™s possible for us to keep it alive.

Sometimes there are what might seem like projects â€“ for instance, last winter we did something here at the studio space, that turned it into a museum, and this was a museum of the local history of the neighbourhood. And that you could say was a project in a sense because thatâ€™s not what we normally do; it wasnâ€™t a play. But this was because we now have the space, we are located in this neighbourhood and we are very interested in the history of the neighbourhood.

Occasionally we publish a book. We have been publishing a magazine for 15-20 years now. 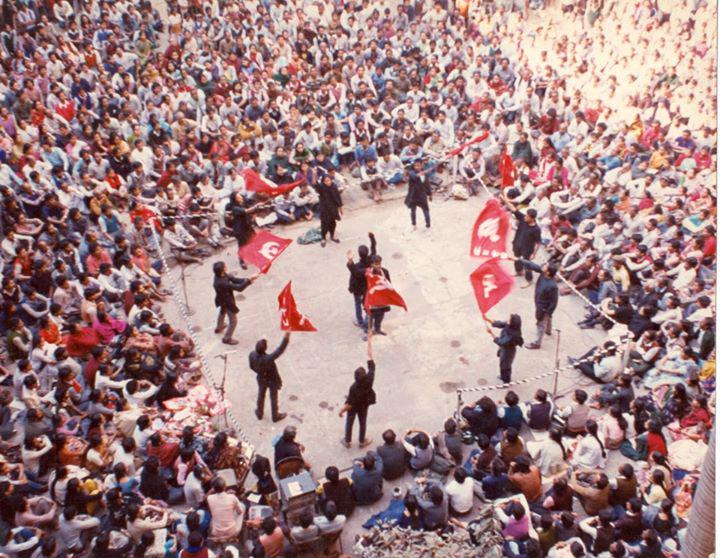 Sudu: So the core of what we do is the theatre, making plays and performing plays. Mostly, these are short half-an-hour plays so very often itâ€™s possible for us to do 2 or 3 performances an evening or on a Sunday, or on a holiday we end up with 6-7 performances a day. And these are plays that are very easy to transport; these donâ€™t require setup, etcetera. This takes up about 60% to 70% of our actual time. The rest of the time: some of it is spent in planning, some of it is spent in things like organising talks, like the one that you did today. Thereâ€™s an annual lecture that we do in memory of Safdar. [Safdar Hashmi , Janams founding memer and leader, was killed in the attack] Thereâ€™s a big even that happens on the 1st of January which is the day of the assassination. Over the years this event has grown from being not just an event on the 1st but thereâ€™s a whole lead up of activities that lead up to the 1st and then sometimes thereâ€™s also stuff that follows.

Mala: This is the place where we were attacked 25 years ago when we were performing for workers as a follow up of a very, very important and successful seven-day industrial strike which happened in November and we were continuing the play later on, and then on the 1st of January we got that attack. That is a place in an industrial area which is actually not technically in Delhi, itâ€™s in the neighbouring state.

Mala: Once every two years we also do a bigger play which we call a proscenium play except that itâ€™s not always done inside a prosceniumâ€“ meaning itâ€™s an open-air play, itâ€™s a two-hour play.

Why do you do this? 40 years later you still make and perform plays. Why?

Sudu: In the first place we love theatre, so thereâ€™s the sheer enjoyment of making a play, of taking it out, of performing. Like I know for instance at a personal level that no matter how hard or tedious the process of making a play can sometimes appear to be, thereâ€™s excitement in it but even more is then you actually start performing it. I love acting! I love it! The second source of energy for me has been personally that when I first came to street theatre street theatre for me was a more or less finished form. Over the years I've realised that there are very many different things that you can do in street theatre and that you can think of street theatre in lots of different ways, as a creative form of expression.

Secondly, politically you could call me old fashioned maybe, but I still have a fairly conventional view of politics: I believe that revolutionary change is possible and so therefore one sticks to that idea. I think that despite whatever challenges one faces, I personally think that the Communist movement has not run out of relevance; it continues to be relevant. . 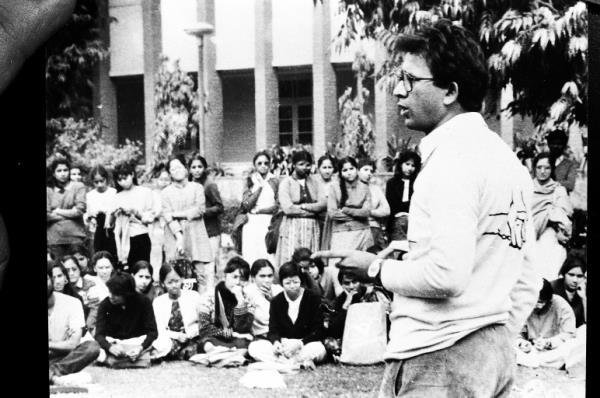 Mala: I would say that if you are imagining any kind of better world in the future, I think the ideas and the values have to begin now, and art I think plays a huge role in that in raising questions. So thatâ€™s possibly the political part of why one is doing this. And, yes, I think performance is great fun because some day what has been created is you can see for yourself how it is being received or not â€“ or not â€“ sometimes not at all. And thatâ€™s I think great. (â€¦) I think we need to raise questions; I think change is not something that the play can bring. I think people do think all the time and I think itâ€™s not my job or I donâ€™t think of myself as bringing about change, I think itâ€™s people who bring change [laughter in voice] and I only tag along with them. So itâ€™s when there is a movement out there, where there are social movements happening and when change is taking place, I think art and in our case theatre, is there as support, drawing upon it, giving it back.

You know, the value of the arts is something that I think people recognise when they see a good play. And when the play is nonsense they watch it politely and you know that theyâ€™re being polite. I donâ€™t want a polite audience. And they are not; when we do a good play, itâ€™s there and itâ€™s exciting because thatâ€™s where engagement in a variety of ways is happening â€“ with the audience, with the play, the audience amongst each other.

Sudu: The process of change, itâ€™s not a one-way street. In other words, itâ€™s not like you do a play and the world will change. No. But does your play have a role in making change? Yes, it does. Itâ€™s not a role that you can give a one-to-one sort of correspondence to all this. You canâ€™t say this play led to that change and this person or these groups of people. No. But at the same time you wouldnâ€™t be doing the play if you thought that it had nothing to do with change, right. So itâ€™s a dialectical thing; change happens in society, change also happens through ideas â€“ and ideas have to lead the way also.