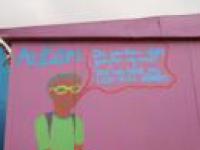 A self help group comprised of the parents or caregivers of children with disabilities and facilitated by local NGO Afrika Tikkun has launched the Paint it Purple Campaign to educate the community and challenge stigmas around disabilities.

In this large informal settlement, the stigma attached to disabilities can be overwhelming. Some mothers of children with disabilities decided to fight stigma and ignorance with this "Paint it Purple" campaign run by https://www.facebook.com/AfrikaTikkunNPC? â€” atOrange Farm.

They chose to paint their homes purple, decorating the walls with images of their children, inviting others to engage in conversation with them about differences.

â€œStigma and superstition are perhaps the greatest challenge to those living with disabilities in South African communities,â€ says Jean Elphick, Manager of local NGO Afrika Tikkunâ€™s Empowerment Programme with Children with Disabilities and their Families.

According to Elphick, focus group discussions with families have revealed that while the physical and practical challenges of living with disabilities are huge, it is the social exclusion which families battle with most.

â€œMany people still believe that those living with disabilities are cursed, bewitched or not even human,â€ Elphick explains. â€œThe result of this is that such people â€“ and particularly such children â€“ are often abused and malignedâ€.

Since June, the group has arranged to paint one familyâ€™s house purple each month. The purple houses each have a mural designed to celebrate the child living there.

â€œThe outcomes so far have been extraordinary,â€ says Elphick. â€œNot only have the murals prompted open conversation, questions and understanding, but group members have met people who, until now, have kept their children with disabilities hidden from the public.â€

On the 13 October, another 15 families will paint their houses.