Home Features Language and power in spaces for educating: Co-constructing understanding(s) of terms

Language and power in spaces for educating: Co-constructing understanding(s) of terms 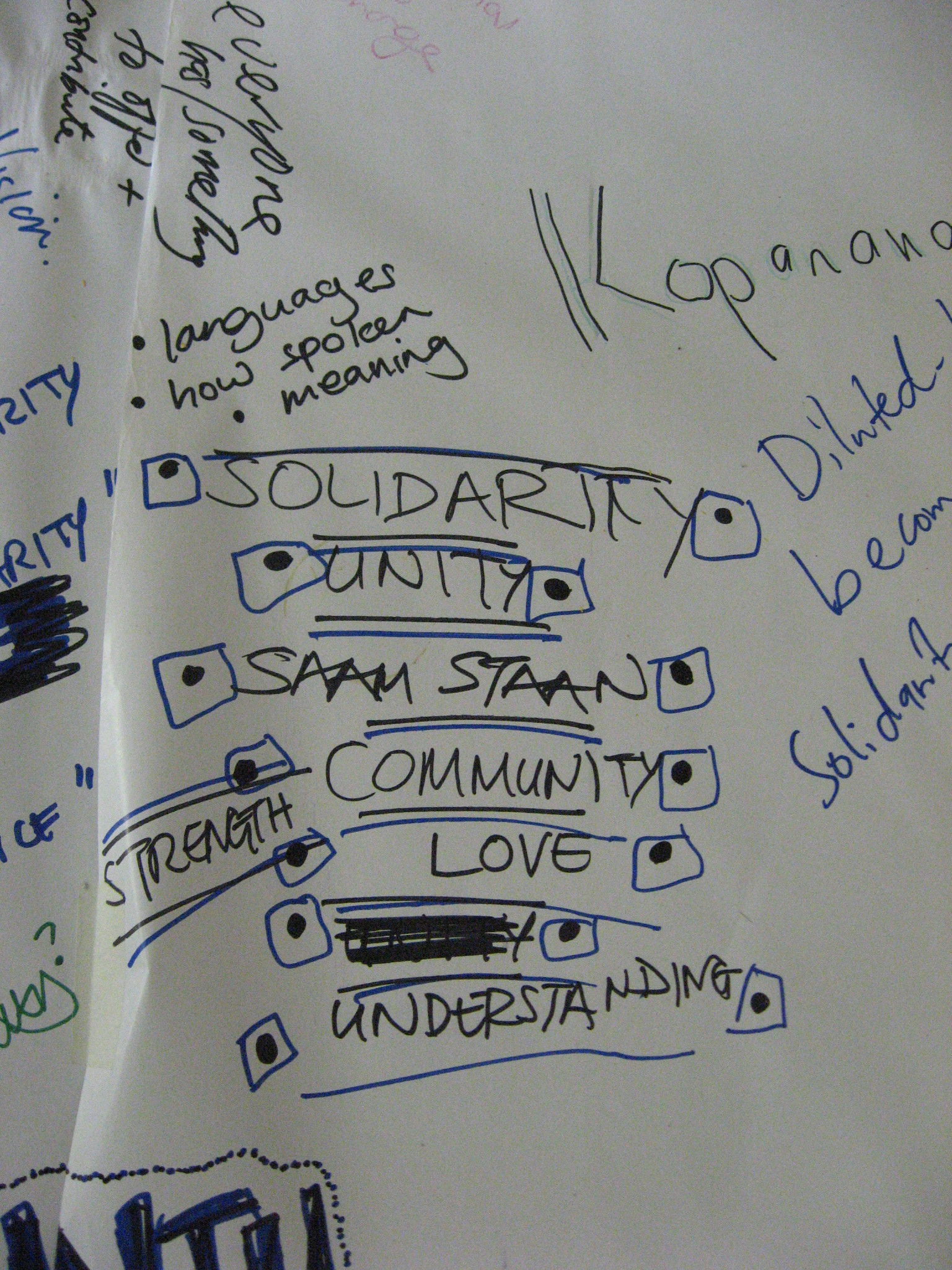 NgÅ©gÄ© wa Thiong'o (1986) writes about his colonial school in Kenya in the 1950s. At this school, if anyone was caught speaking a language other than English, they were made to wear a wooden frame around their neck which read, â€˜I am a donkeyâ€™. Today in Cape Town we hear of students being â€˜de-meritedâ€™ at some schools for speaking isiXhosa in the playground â€“ a language prominently spoken in the Cape. Historically and still today, language has often been used in formal educational contexts to control and oppress. What are we teaching when we punish people for speaking their home language? Amongst other things, we are dismissing a culture and suggesting that only certain cultures align with what we think of as `education`. We are a multi-lingual society, with 11 official languages, but we are still to develop methodologies which enable everyone to be understood, feel included and â€˜at homeâ€™, whether in formal educational spaces or informal meetings. How can we challenge domination through the way we use language when we communicate?

Describing â€˜Lost in translation: Life in a new languageâ€™, Eva Hoffman (1989) pondered what was happening to her in this new world (her family went as migrants from Poland to Canada): confronted with a flood of words that are foreign she felt she no longer exists:

â€˜I donâ€™t see what Iâ€™ve seen, donâ€™t comprehend whatâ€™s in front of me. Iâ€™m not filled with language anymore, and I have only a memory of fullness to anguish me with the knowledge that, in this dark and empty state, I donâ€™t really exist.â€™

Furthermore, bombastic language i.e. â€œbig wordsâ€, are sometimes used to confuse and silence. Some people in power say things that make others feel stupid and in this way exclude them from a conversation. Educators must ask ourselves: how do we facilitate learning and teaching so that everyone is able to participate, feels heard and understood? It is important to explore and build a common understanding of the language used in your context of organizing. Finally, even if we do not all agree on a meaning of a word it is useful to explore different understandings, where they come from, and decide, together, on the â€˜meaning in useâ€™ for the context.

We offer one language exercise which you can amend to suite your situations. Please send us exercises or strategies that you use so we can share them on the website.

The Popular Education Programme often begins a workshop with a language translation exercise:

1.      Ask participants how many and what languages they speak. Comment on the richness of many languages in the room and how they can offer us the possibility of many different viewpoints and perspectives.

2.      Encourage participants who speak more than one language to â€˜code switchâ€™, that is, think and process ideas in multiple languages and thus build deeper and broader understandings. Give an example to illustrate what you mean.  For example, â€˜participationâ€™ in English, can mean many different things, ranging from â€˜being thereâ€™ to â€˜making decisions togetherâ€™. Do â€˜saamwerkâ€™ and â€˜ukuthatha iqhazaâ€™ (isiZulu) and â€˜ukuthatha ixhaxhebaâ€˜ (isiXhosa) express the same meanings as â€˜participationâ€™?

3.      Do a quick brainstorm and collect as many words that are important for the discussion topic. For example, if your workshop looks at â€˜popular educationâ€™ you may have words such as â€˜participation, power, transformation, social change, action etcâ€™. Write up the words clearly visible on a flipchart.

4.      Invite participants to move into small groups of 4-5 ensuring that you have at least 3 different languages in each group.

a.      Translate each of the words into at least 3 languages. Beware: there may not be one word that exactly describes the meaning â€“ so find multiple words! If there is no direct equivalent of the word in your language, find a way to describe the meaning.

b.      Develop an extended definition of the word, based on the multiple translations!

7.      In plenary, ask each group to report their translations and definitions. Discuss each one, extending the meaning of the word / concept. There will be much contestation as other participants contribute new translations and meanings! In the process, a deeper understanding of the word evolves â€“ and one that shows how meanings derive from context (time and place).

8.      Summarise insights generated and draw some conclusions: what does this mean in terms of communications?

9.      For the duration of the workshop, encourage all participants to check understandings of concepts and ideas by translating unfamiliar terms into their home languages when they arise â€“ and check with others / ask for â€˜translationâ€™ i.e. explanation, if they find this difficult.