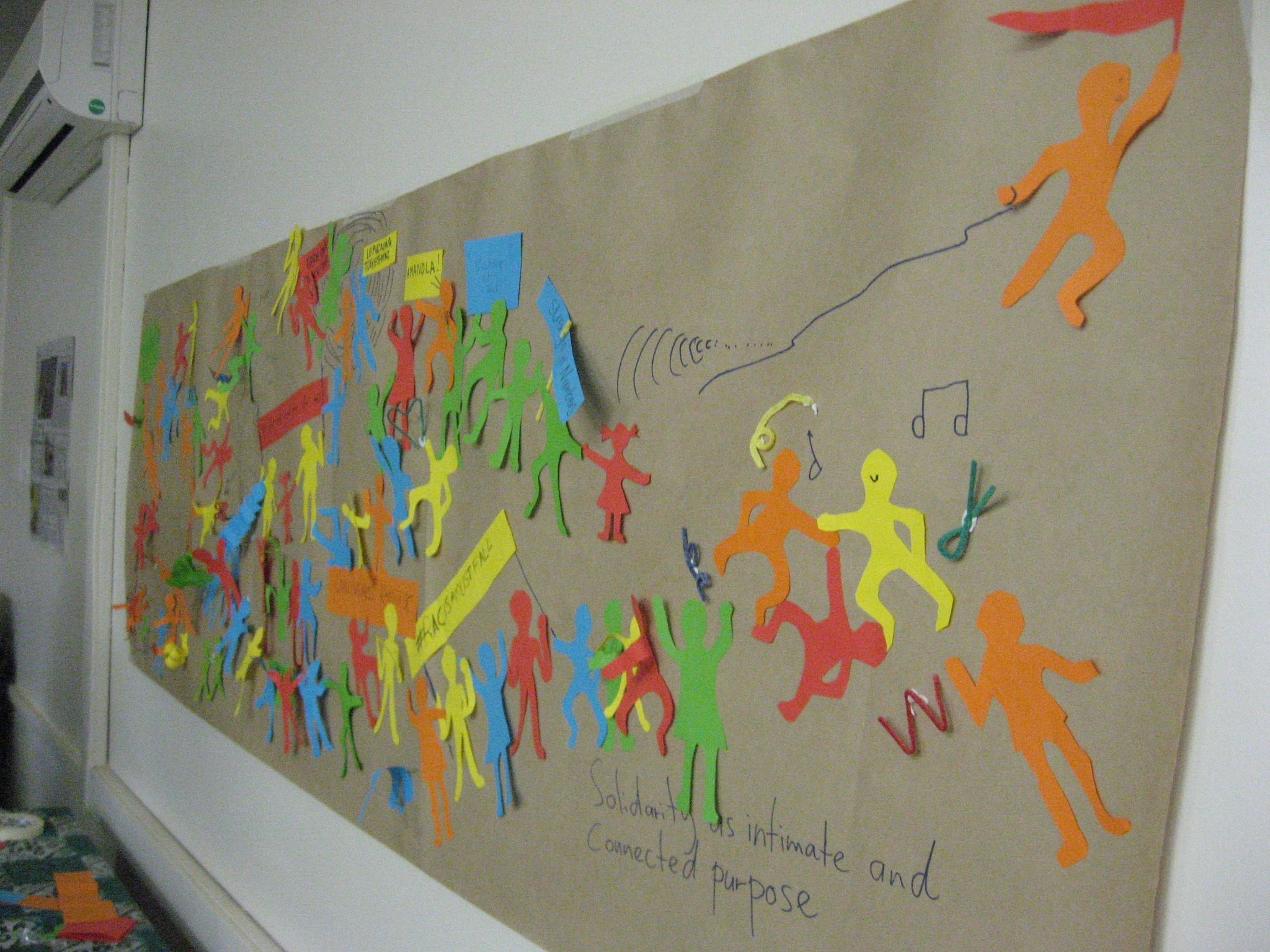 Some fifty people gathered at the colloquium which was held at the Sustainability Institute, Stellenbosch. Participants came from different organisations, including academic institutions, government, social movements and NGOs, from as far away as Chile, India, Senegal and Canada and as close as Delft, Khayelitsha and Grahamstown. They brought with them focus, energy and willingness to be creative, and a commitment to engage with critical questions both on a one on one basis, around tables, and in plenary sessions.  The aims of the colloquium were to grapple with the central theme and in the process give food for thought to 20 people who are contributing chapters to a book of the same name. Presentations were made, in the main, by contributors to the forthcoming book. 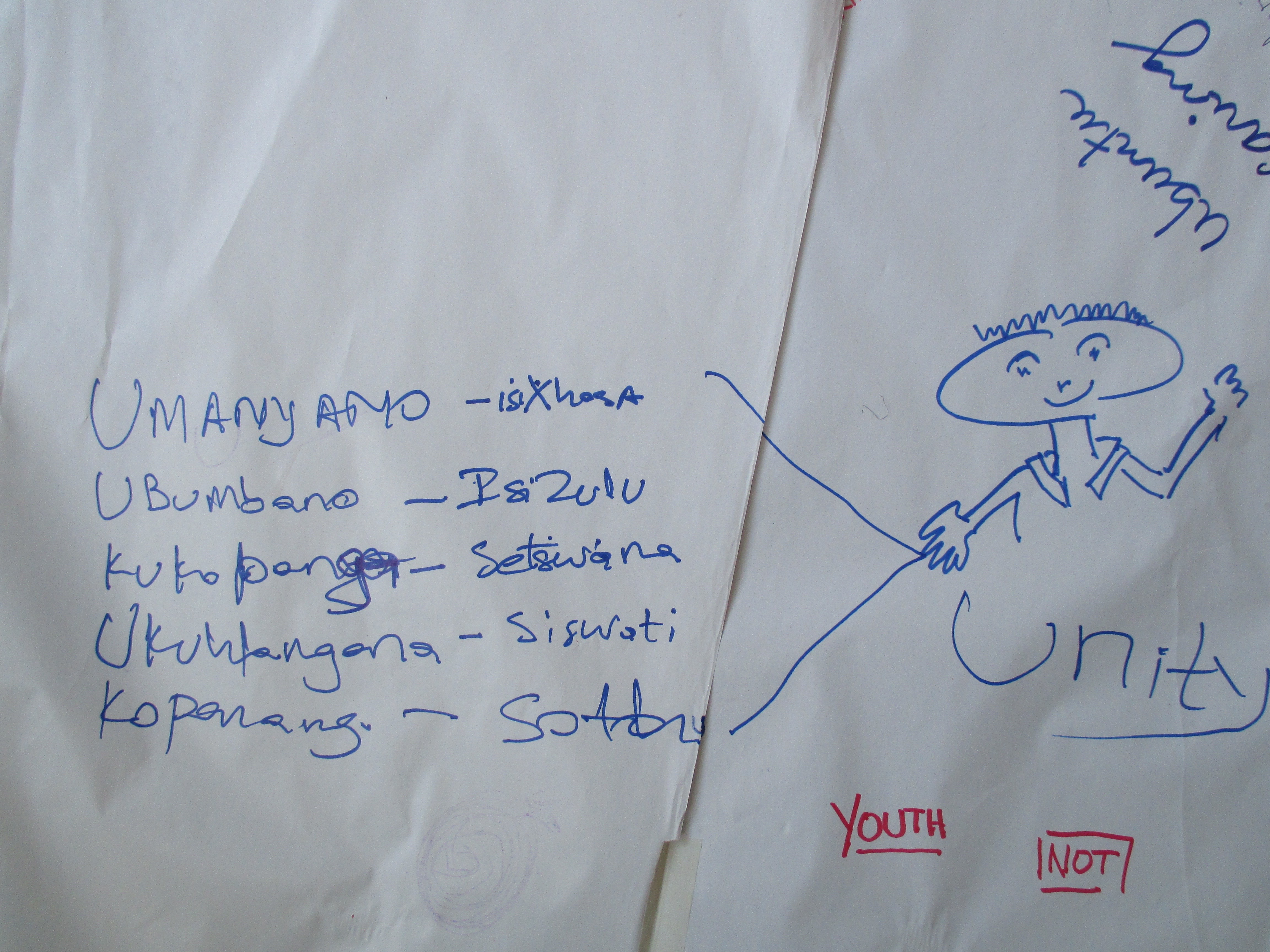 The colloquium began with the creation of a colourful, three-dimension â€˜solidarity muralâ€™. After welcomes and introductions, all participants engaged in a translation exercise: attempting to render â€˜solidarityâ€™ into as many languages as possible, and in the process, differentiating and clarifying meanings. This was followed by 3 brief contributions that highlighted key conceptual issues concerning â€˜solidarityâ€™. 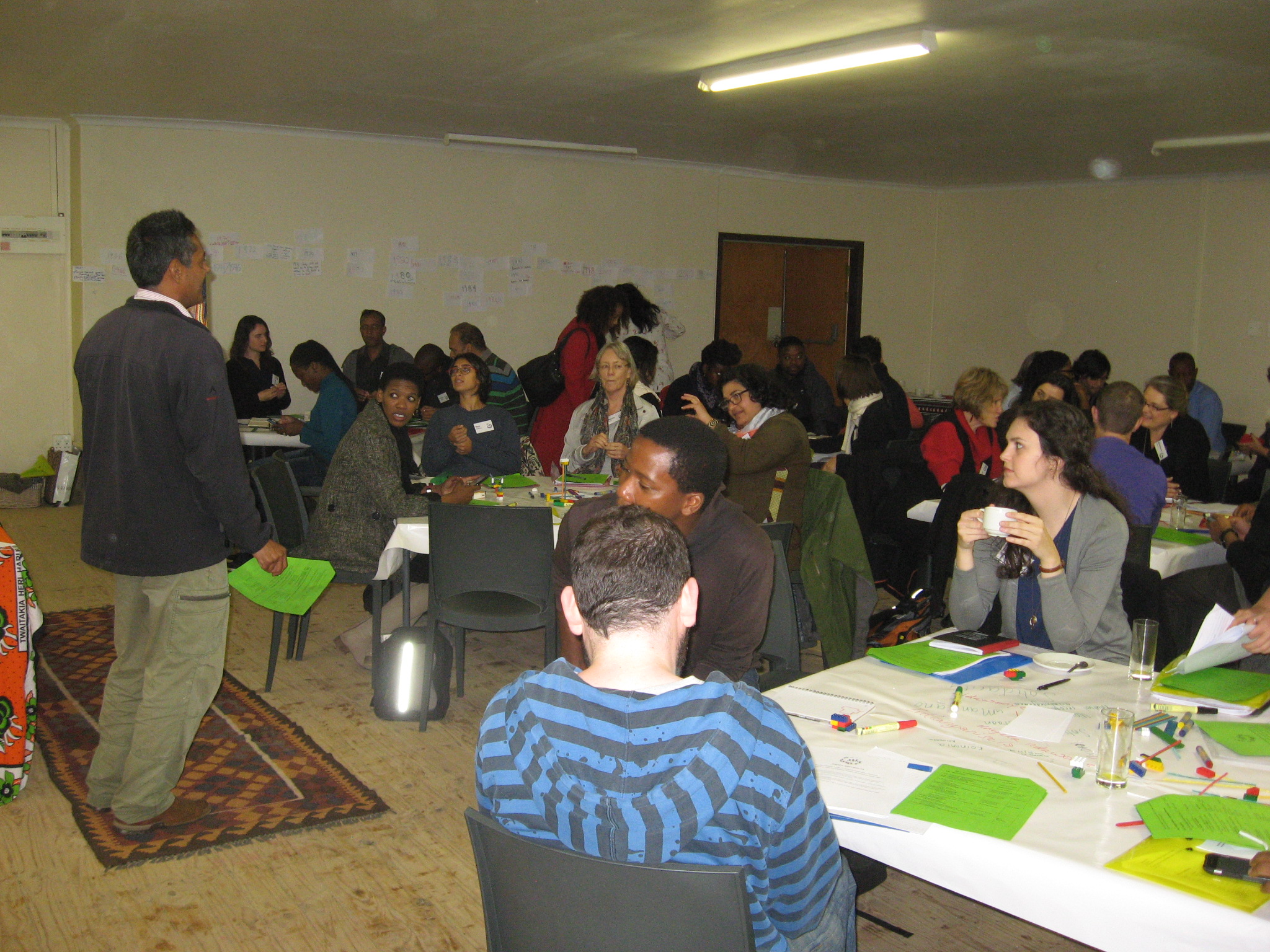 To understand â€˜solidarityâ€™, it must be placed within contexts â€“ and the next session began with processes of situating solidarity actions within struggles. To start with, we constructed a â€˜time-lineâ€™ of activist struggles, spanning from the early sixties until today. After a historical overview of 3 strands of solidarity in the South African Black Consciousness Movement, Labour Movement and Peopleâ€™s Education Movement, different contributors began to offer their â€˜storiesâ€™ of solidarity actions â€“ ranging from the context of recent student activism, to initiatives creating alternative â€˜solidarity economicsâ€™, to land and housing. In the evening of the first day, colloquium participants were invited to continue the conversations over soup, bread and wine.

Day two began with bodywork â€“ a series of exercises that reminded us that learning is not just cognitive but also emotive and physical (head, heart and hands)! Presenters then explored various pedagogies of solidarity, and examined threats and opportunities as they appear in different contexts, informed by various purposes. The day ended with a session on popular theatre as a vehicle for â€˜forging solidarityâ€™ (or not). Participants then constructed a body image/sculpture of the solidarity mural â€“ symbolically putting themselves into action, together, and rehearsed some collective rhythms to animate the image. 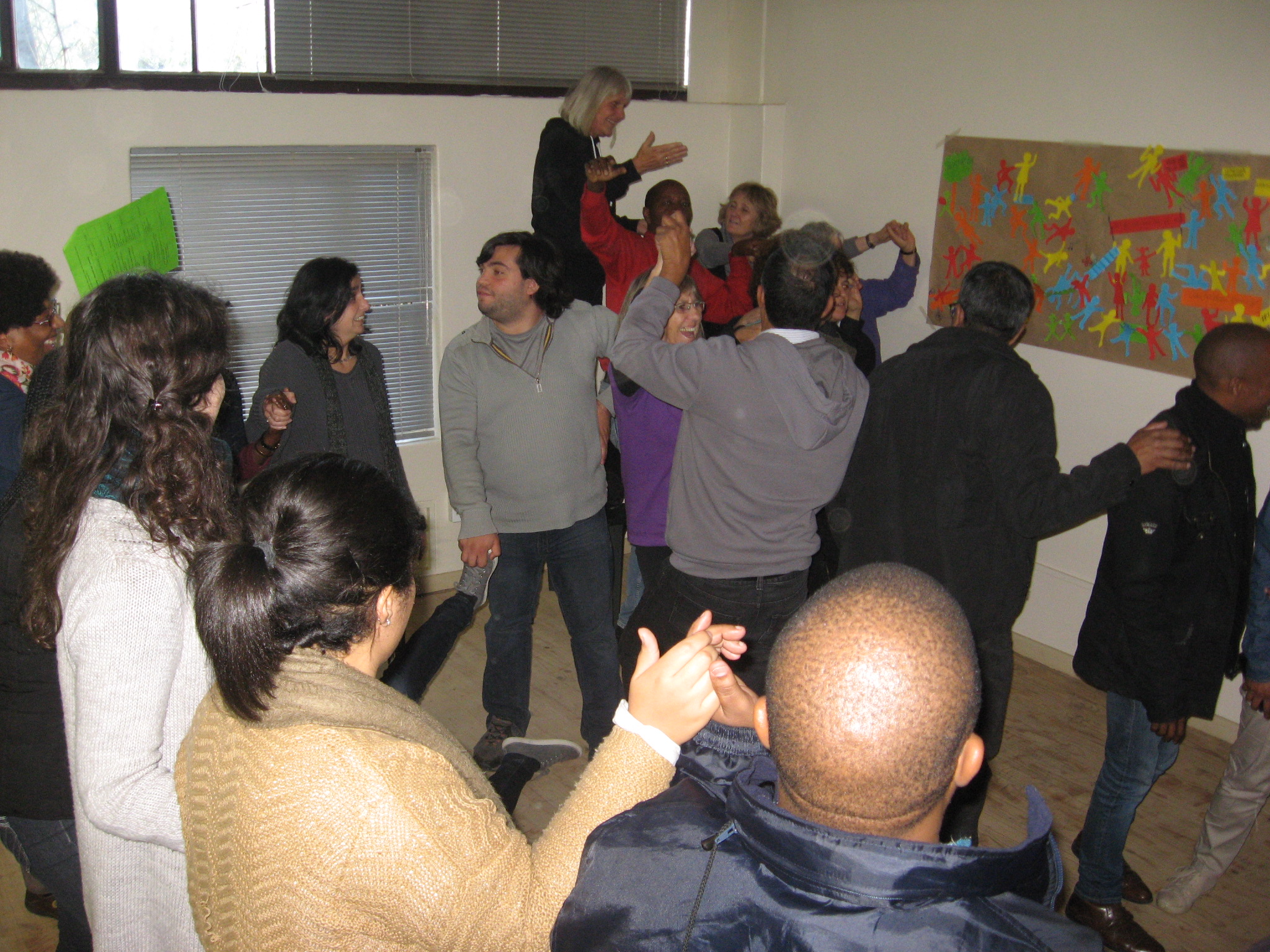 At the end of the first day there was a sense of elation: a day of uninterrupted reflection and dialogue on solidarity â€“ what a privilege! At the end of day 2 a small panic: ok, we were just getting going to really get beneath meanings of â€˜solidarityâ€™. We asked what it is that binds people in action, and what is the nature of struggle and solidarity; how is it different from â€˜supportâ€™ or â€˜working togetherâ€™?  In a writing workshop on the following day, day 3, excitement mounted as the group of book contributors poked and prodded and stretched the discussions during a structured â€˜fishbowlâ€™. We consolidated ideas, generated new ones, challenged and juggled examples and concepts and grappled with the tensions and contradictions that were arising with each new contribution. 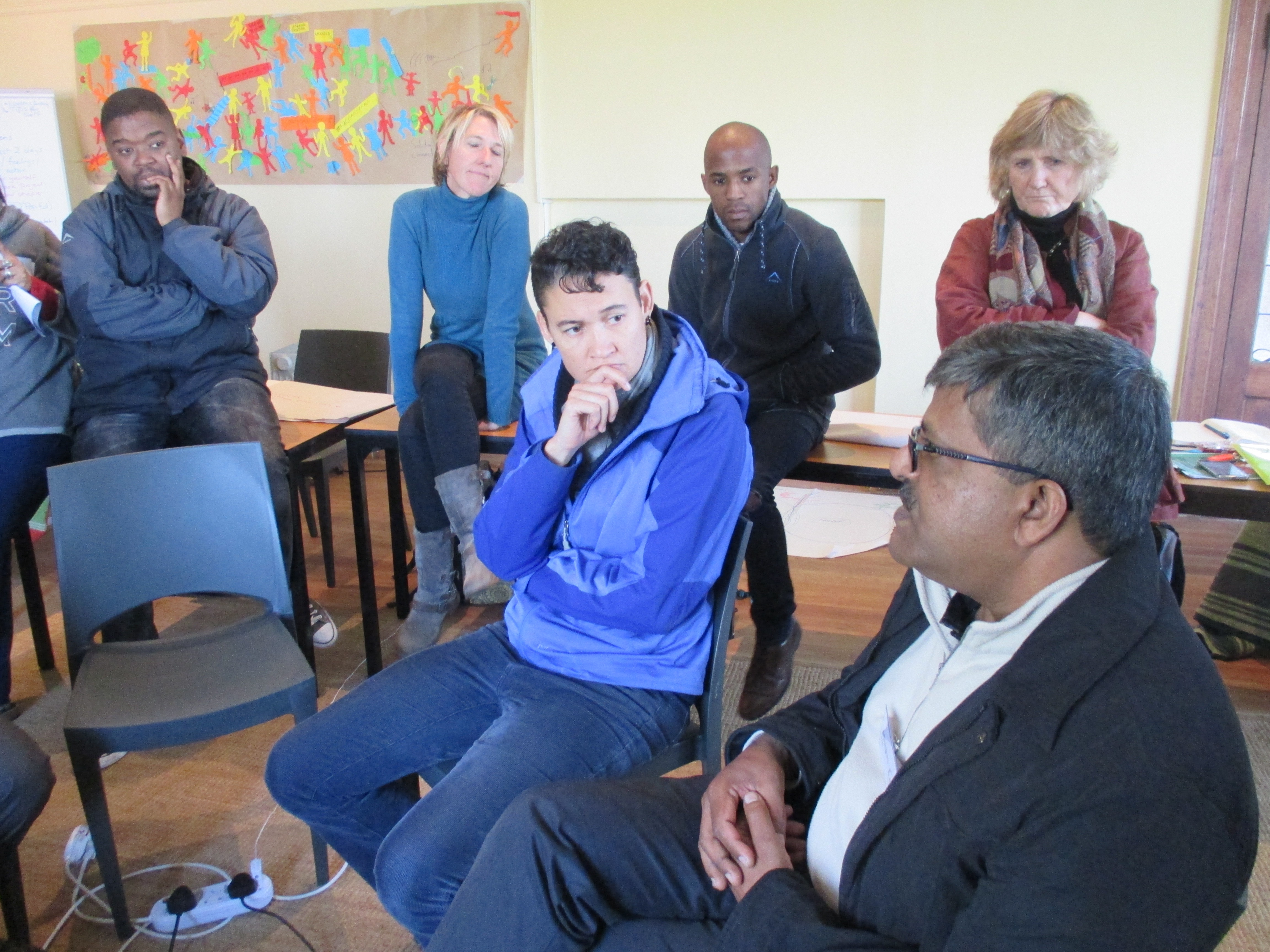 Solidarity was described variously as a â€˜danceâ€™ or a potentially violent process of â€˜smeltingâ€™, as people have to give up and let go in order to be free to â€˜forgeâ€™ solidarity.

In the end, we were left with more questions than answers. Some would argue: this is the nature of popular education, and even though it leaves us uncertain and possibly conflicted, it also leaves the dialogue open. We agreed on some central tensions:

There were some common questions:

We parted with the understanding that solidarity is contingent on local conditions; it has to be forged and re-forged for each new situation. It is underpinned by a sense of moral responsibility and a willingness to â€˜be the change we want to seeâ€™, in contexts that are contrary. Solidarity, in other words, is inscribed with opposition. At the end of three intensive days, contributors marveled at the ways that the colloquium had demonstrated a radically different way of creating a book together. This was seen as catalytic in and of itself - a collective, highly participatory process of knowledge co-production with a collectively developed sense of common purpose.

Thanks go to NIHSS and UWC for supporting these processes.