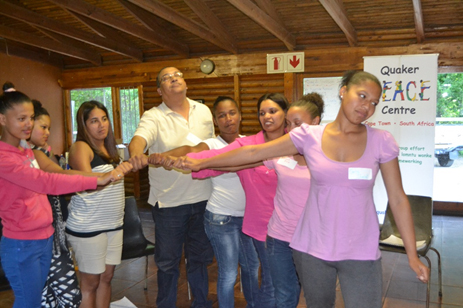 The Alternatives to Violence Project (AVP) is an international peacebuilding and non-violence training organization. AVP started in New York in 1975, when inmates at Green Haven prison sought help on conflict resolution to reduce the physical violence in their prison. A workshop designed by a group of Quakers was implemented with these inmates. The success of this workshop in a dangerous prison environment gave rise to the customization of AVP for different contexts across the globe. Four decades later, AVP is now offered in prisons, schools, universities, places of work and worship, and numerous community settings in approximately 59 countries on all five continents. A large community of AVP facilitators exists across the globe and connect with each other virtually. In addition there are AVP gatherings every two to three years in different regions and at an international level. The most recent AVP Africa regional gathering took place at Kakamega, Kenya in January 2014 and in July 2014 an international gathering was held in Ireland. This community is loosely structured and has evolved organically over the last four decades. Participation in workshops and facilitation is voluntary. A key part of AVPâ€™s strength and identity is its three workshops.

AVP has three levels of workshops, namely, the AVP Basic, AVP Advanced and Training for Facilitators (T4F). These powerful, experiential workshops, each run over two to three days depending on local circumstances, prepare participants to respond non-violently to conflict. All workshops employ participatory pedagogy, using games, activities, dialogue and critical reflection to foster deep experiential learning. Kreitzer and Jou (2010, p.80) aptly describe such AVP pedagogy as â€œa dynamic blend of deep and honest sharing on difficult subjects and fun games that enable the participants to laugh together.â€ All workshops create ample room for the most pressing conflict issues faced by participants to be dealt with in role-plays and discussions. AVPâ€™s participatory ethos and pedagogy, together with its commitment to humanizing and just personal and societal change, makes it an important part of popular education today.

The AVP Basic workshop introduces and explores nonviolent alternatives to conflict by building participantsâ€™ skills in affirmation, communication, trust-building, cooperation and community building. The Advanced workshop, builds conflict resolution skills by focusing on building consensus. The T4F workshop builds facilitation skills and allows each participant to gain some practice in facilitating a component of an AVP Basic workshop. This third level workshop (T4F) leads to accreditation as an AVP facilitator. All workshops are facilitated by a team. Once certified as AVP facilitators, facilitators gain experience in facilitation by initially serving as an apprentice to more experienced facilitators until they are confident and experienced enough to lead a workshop. This is an important built-in system of peace educator apprenticeship within the AVP framework. In some places, support structures and refresher training have been set up for AVP facilitators.

The AVP philosophy is best reflected in the â€œAVP mandalaâ€ (Sanskrit for â€œcircleâ€) which has the concept of â€œtransforming powerâ€ at its centre. Transforming Power reminds participants of their inherent inner power to transform a conflict in a non-violent manner. Five key principles surround this central concept of transforming power, namely:

These create a conceptual model which underpins AVP training as displayed in figure 1 (Alternatives to Violence Project, 2002). Together these core principles constitute AVPâ€™s overarching philosophy and underpin its theory of change. Building peace in the world is thus premised on developing personal peace and changing oneâ€™s own thoughts and actions. AVP believes in the inherent good and humanity of every person and the personal power to transform conflict in a non-violent manner.

Writing from the context of post-genocide Rwanda, where AVP was used to train Gacaca judges in Rwandaâ€™s transitional justice process, Chico and Paule (2004) found that the concept of transforming power was cited in almost every interview they conducted as having the most impact on AVP participants. They write;

It is not surprising that people in Rwanda tend to believe that people are inherently evil, that no one is to be trusted, and that â€œforgivenessâ€ is simply an empty gesture to push the horrors of the past away â€¦ gently AVP moves into these festering wounds â€¦ AVP quietly invites participants to begin to see the possibility of good in themselves and others â€¦ to find deep source of reconciliation and transformation (p. 11).

While Transforming Power is central to AVP training in South Africa as well, facilitators in KwaZulu-Natal have formulated an indigenously-tuned hybrid of the concept by linking it to the concept of Ubuntu. This is a good example of how the AVP curriculum has been recontextualised and made relevant for different parts of the world. 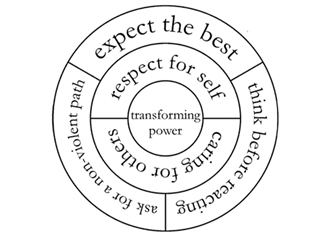 AVP has a strong presence in three provinces in South Africa, namely, Gauteng, Western Cape and KwaZulu-Natal. A group of AVP facilitators is also trying to grow the project in the Eastern Cape Province. The first workshops in South Africa were offered in 1995 by the Gauteng-based organisation, Phaphama who offered workshops in communities, prisons and workplaces. In the Western Cape, AVP is offered as part of the work of the Quaker Peace Centre, and works mainly in communities and schools. In KwaZulu-Natal, AVP workshops have been offered for just over a decade. Initially these workshops were organised for community groups and university students. This gradually led to the inclusion of AVP workshops in a formal university programme for community educators. With the growth of facilitators, the need for a network to organise and support facilitators arose. The AVP-KZN Facilitator Network was started in 2007 and now has about 200 facilitators on its database; a diverse and multi-cultural group of UKZN students, staff and community-based educators. It is coordinated from an AVP network office located at the University of KwaZulu-Natal (UKZN). It meets a few times a year to grow the AVP project and to build skills and relationships amongst facilitators. The network also connects with other AVP structures regionally and internationally. In recent times a programme of research on AVP has been initiated. The AVP network in KZN is also currently in discussions on a partnership Peace Clubs. This will see AVP offered more in school settings with peace clubs.